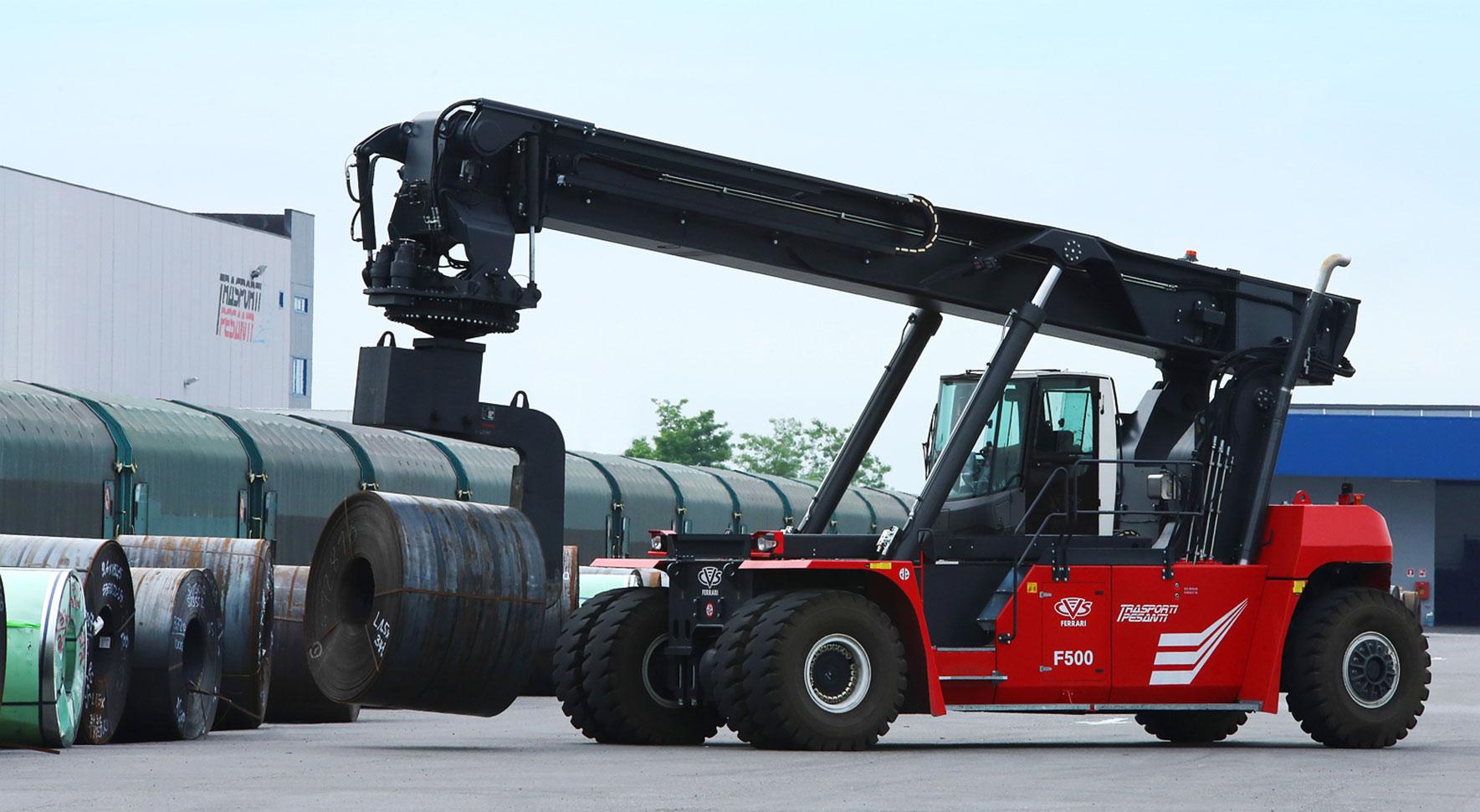 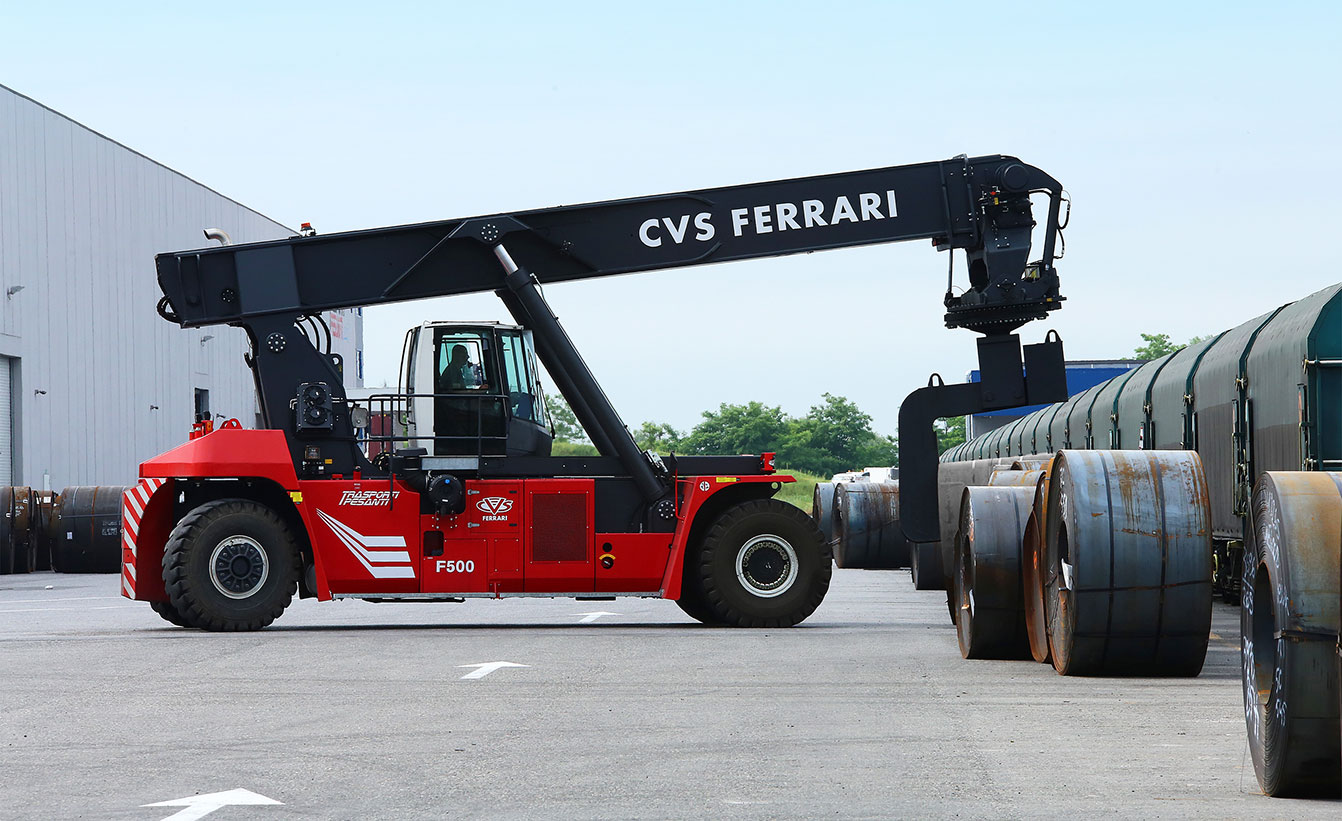 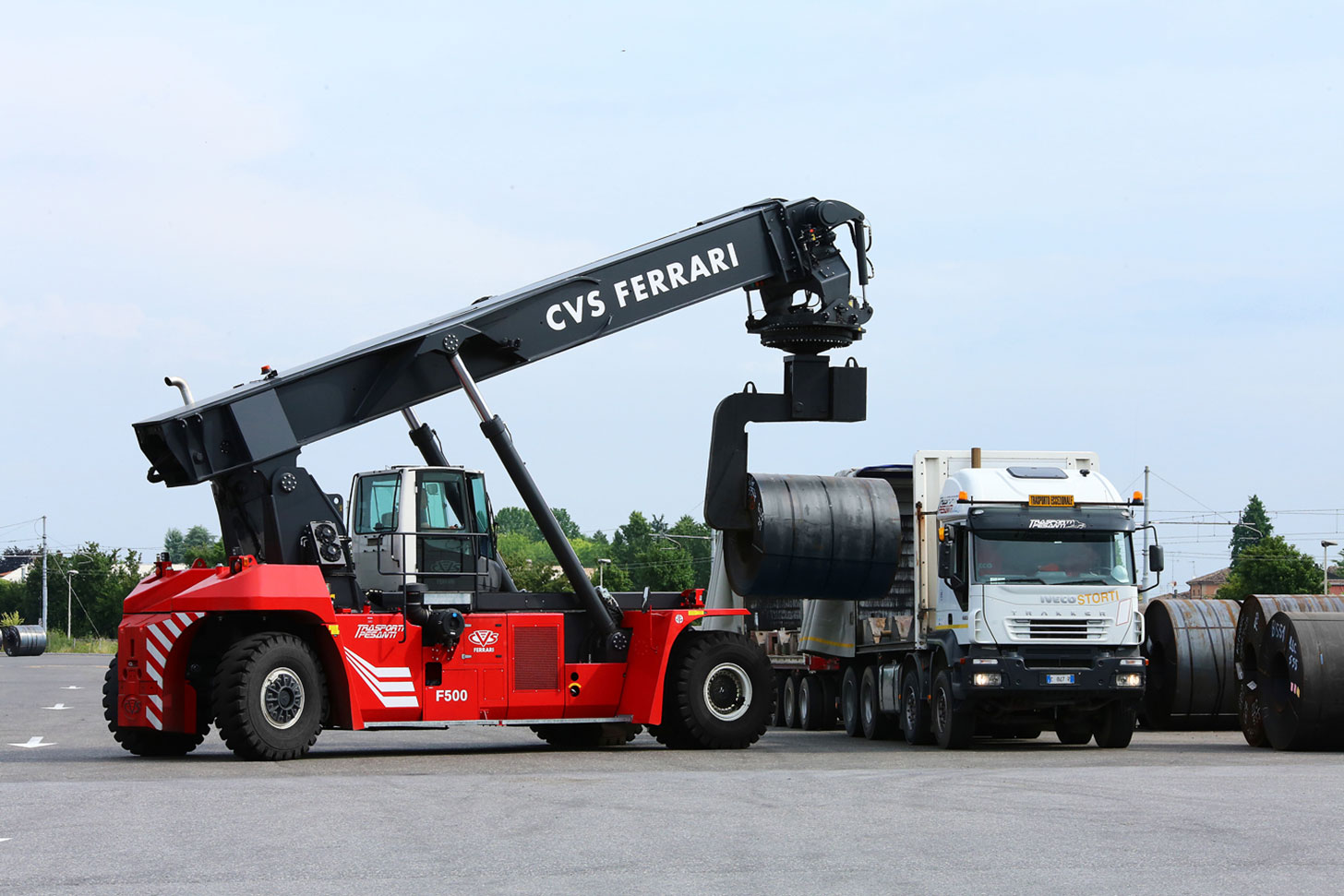 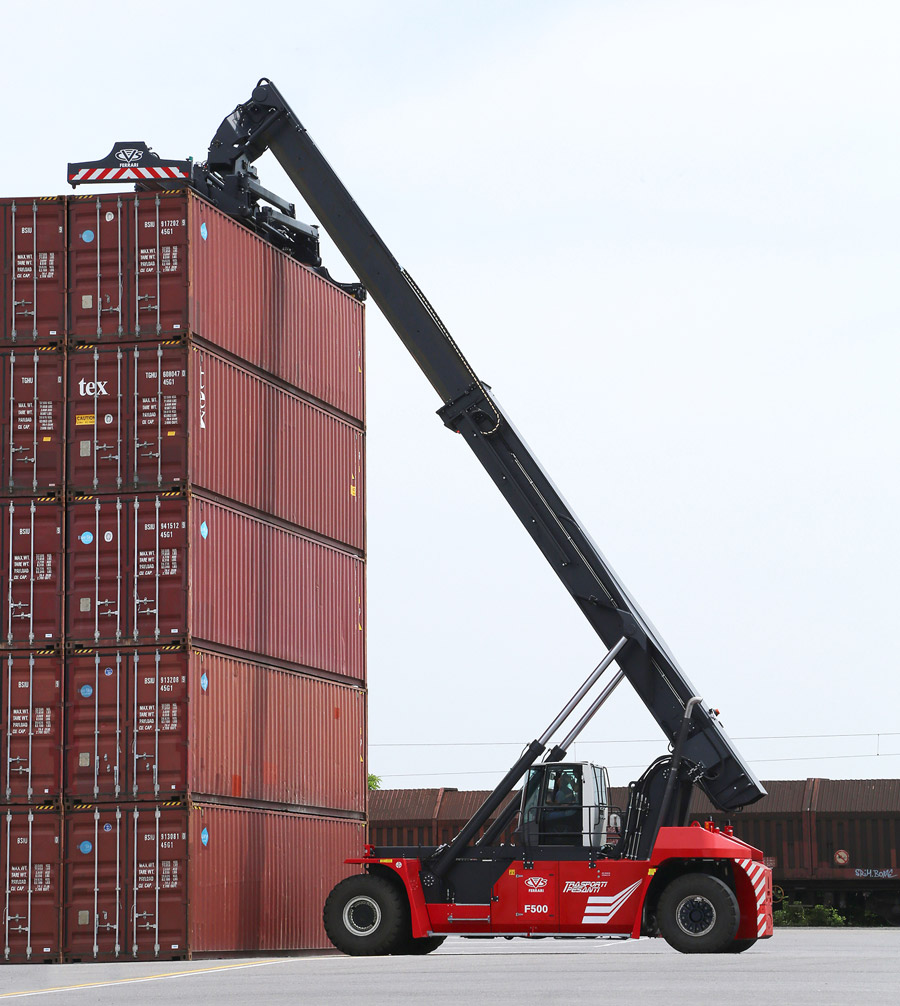 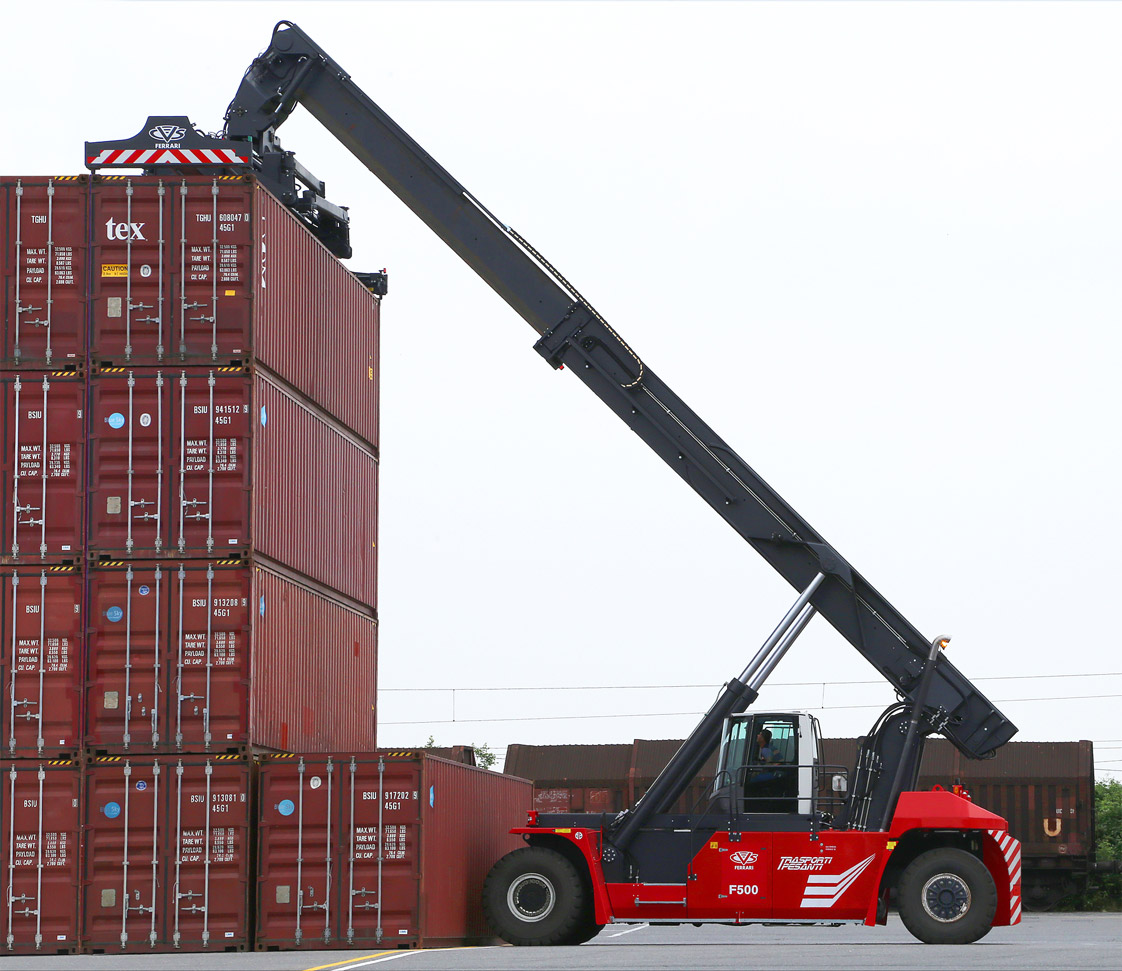 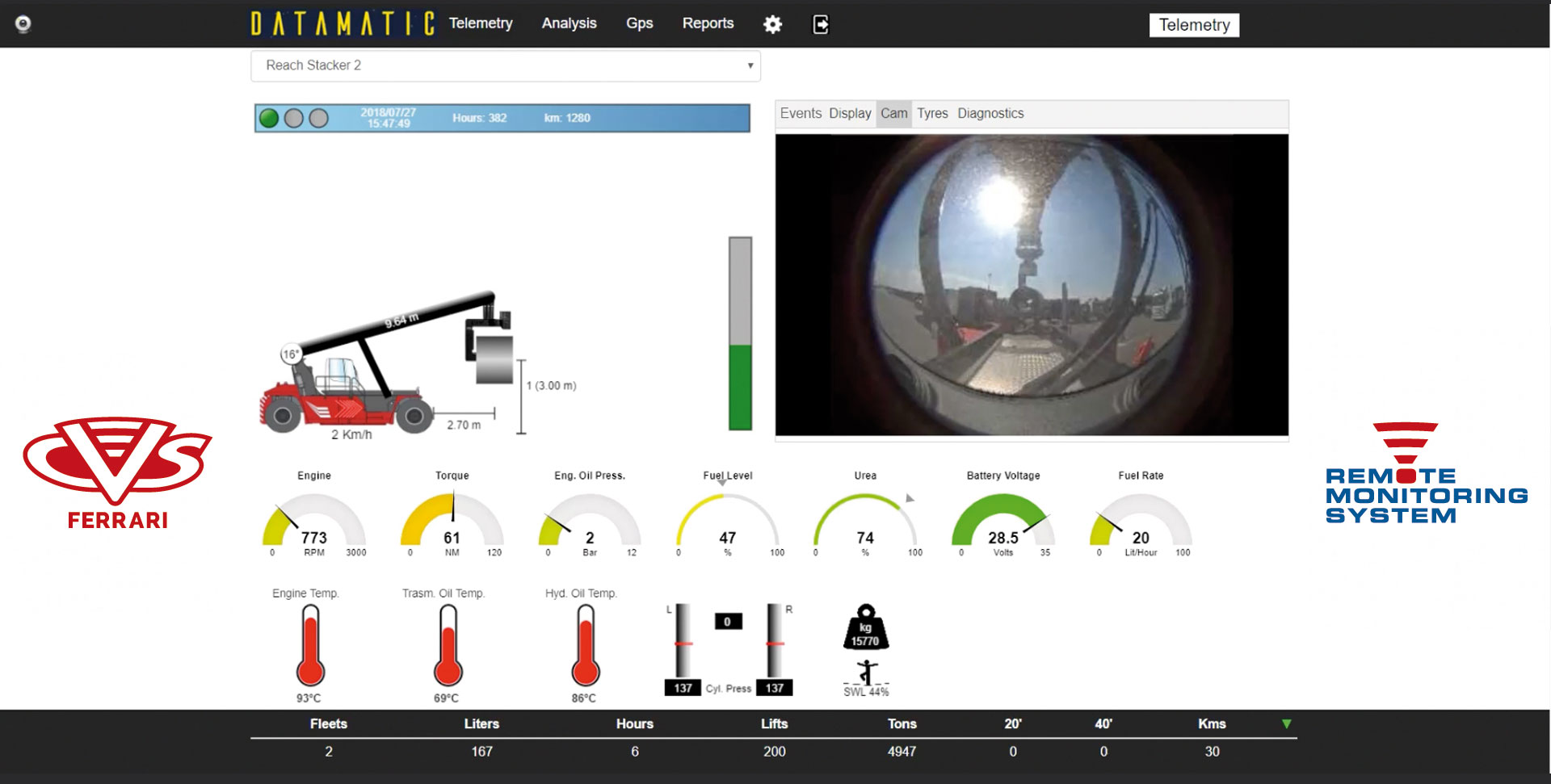 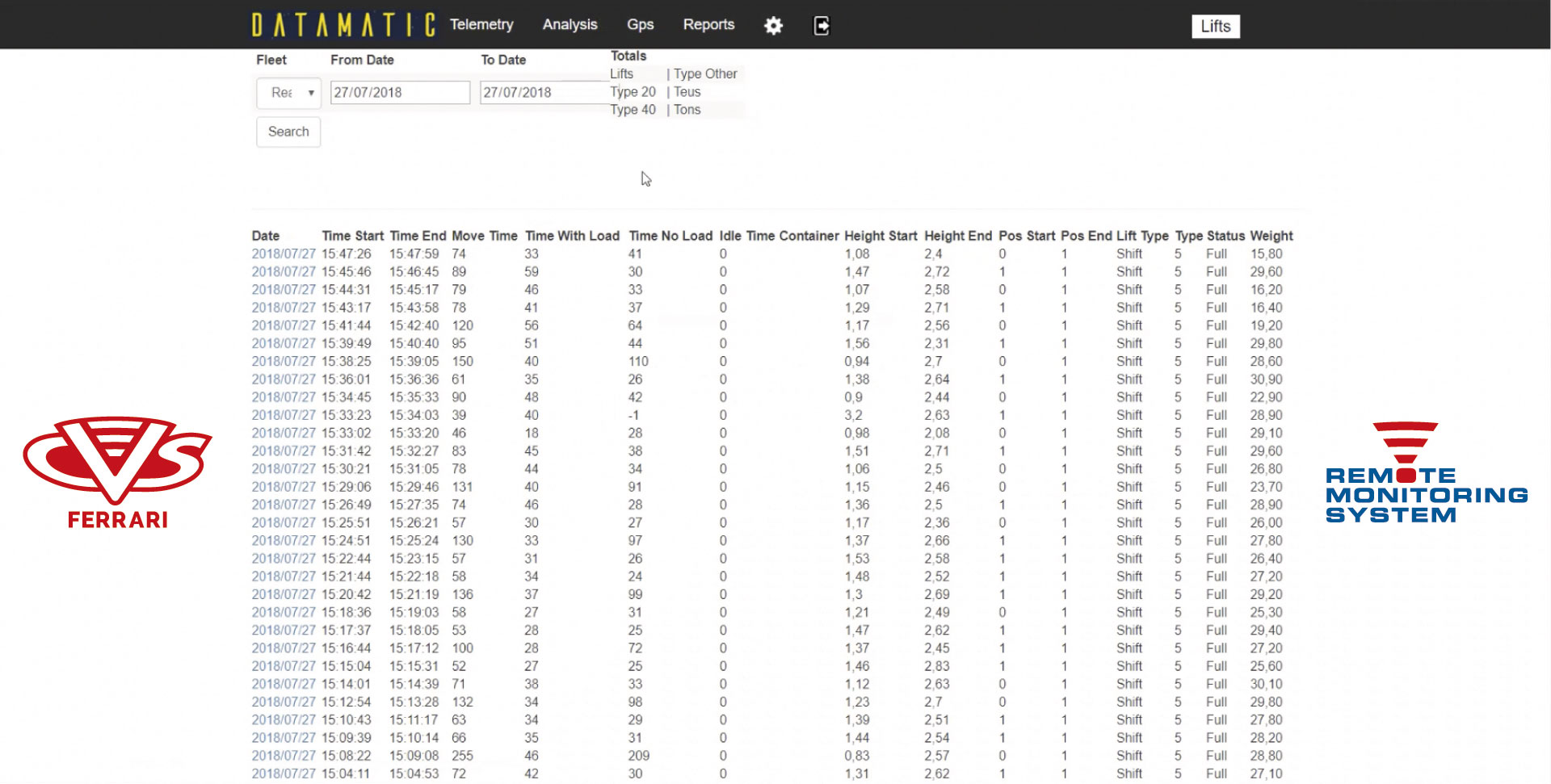 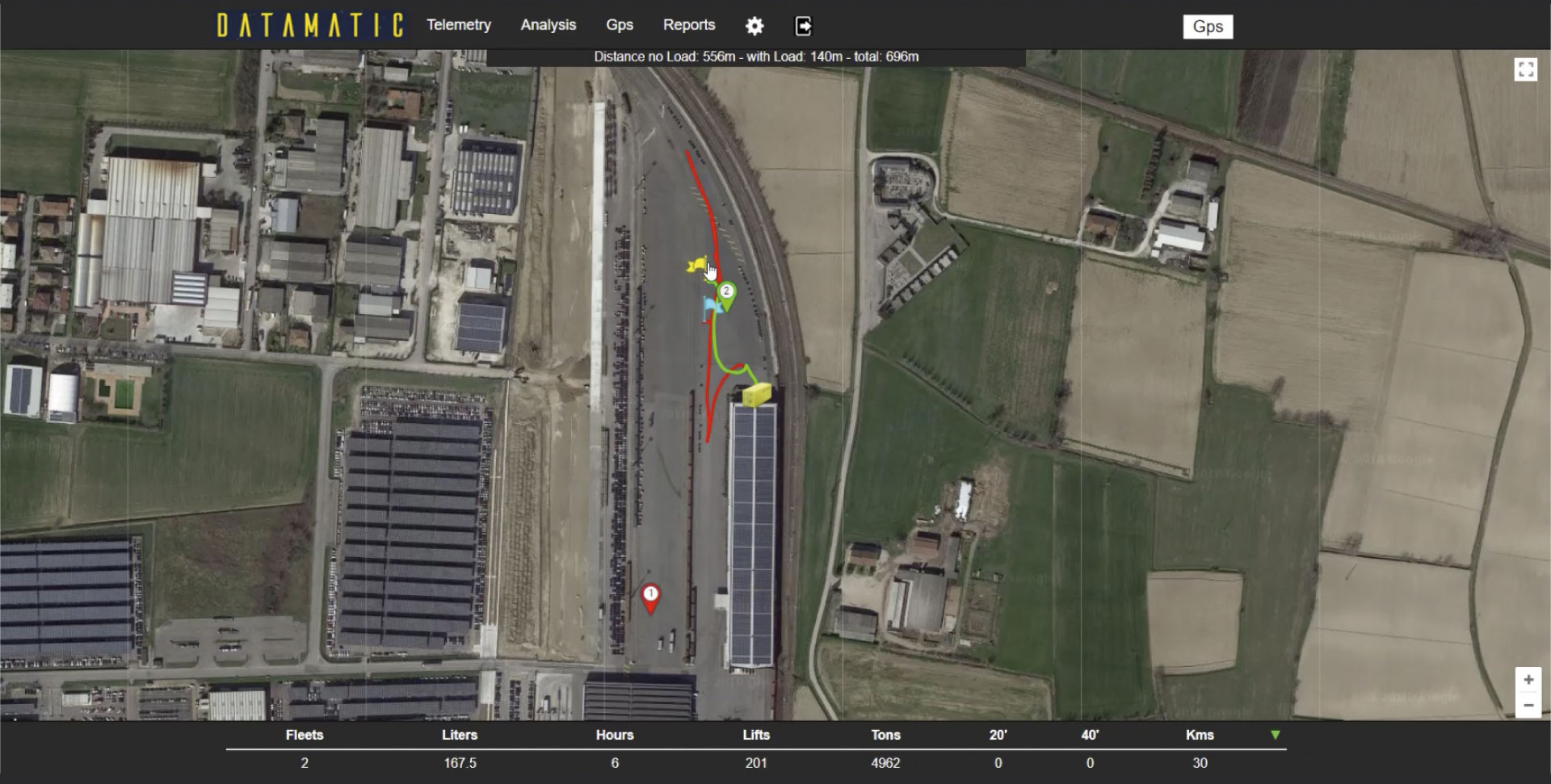 ASTL and TRASPORTI PESANTI (shortly called TP) are two companies of the Storti Family Group that are engaged in the supply of third party logistic services for heavy cargo handling companies in the North of Italy.
ASTL and TP amongst others, handles steel coils and raw material containers for two of the largest Italian steel mills, with operations spread over Reggio Emilia, Mantova, Cremona and Trieste.
After having successfully introduced CVS FERRARI in its lift equipment fleet at the beginning of the decade, ASTL-TP embraced in a major change of its entire operations. Operations in the sites of ASTL-TP are now entirely pivoted on a new fleet of CVS FERRARI Reach Stackers equipped with REMOTE MONITORING SYSTEM and through that, completely integrated with a yard management system developed by CVS FERRARI with its strategic partner DATAMATIC.
Thirteen (13) new CVS FERRARI Reach Stackers supplied between the end of 2017 and mid 2018 have been equipped with REMOTE MONITORING SYSTEM (RMS), the advanced and powerful system developed by CVS FERRARI and DATAMATIC for the real time monitoring, remote fault diagnostic and operational data analysis and processing of liftrucks and reach stackers fleets.
These machines were then equipped with RFID antennas and DGPS sensors connected to the RMS of the truck and capable of detecting the identity of the handled container / coil and the exact position of pick up and release of the same, with a position error inferior to 10 cm.
DATAMATIC supplied to ASTL-TP its NEPTUNO system, that is a TOS software through which ASTL-TP manages its container and coil operations and controls the related parks inventory. Then CVS FERRARI and DATAMATIC developed – through the RMS mounted on the Reach Stackers – a unique integration between the machine and the TOS.
Once the driver has selected on the RMS touch screen the task assigned by the TOS he wants to accomplish, then the machine automatically sets the required lifting height. Such that the driver, once arrived in front of the stack, only has to push a defined button and the machine will automatically lift the spreader (with or without load) at the ideal lift height to perform the operation.
The machine also feeds back to the TOS the data related to the ID of the handled container or coil (through the RFID antenna), the exact position in the space of the handled container (through the DGPS sensor), the weight of the coil container (that can be SOLAS certified), the size of the container and other info. Like exact date and time of pick up and deposit, thus cycle time duration, eventual container outer-balance and more.
In case the driver is not performing the selected task, the RMS informs the TOS and a message is fed both to the driver and to the operations control room. The accuracy of the container and coils park inventory has this way reached the practical perfection, with massive fall-out benefits.
But the most impressive result has been achieved in the almost complete elimination of the manual inputs in the operations management cycle. Labour required for the operational management, accounting and reporting has been more than halved. Speed of tasks execution has greatly improved, whilst accuracy of operations has been like never before. Not to mention the extent of the operations reporting and speed of data analysis and elaboration. In short, ASTL-TP has simply seen its productivity sky-rocket.
All thanks to the integration of an intelligent equipment, the CVS FERRARI Reach Stackers, with an open, flexible and affordable terminal operating system as NEPTUNO.
The way towards the new role and use of the mobile heavy handling equipment has been paved and CVS FERRARI is again the world leader in this important technological development axis. Ahead of times, ahead of competition, ahead of expectations.